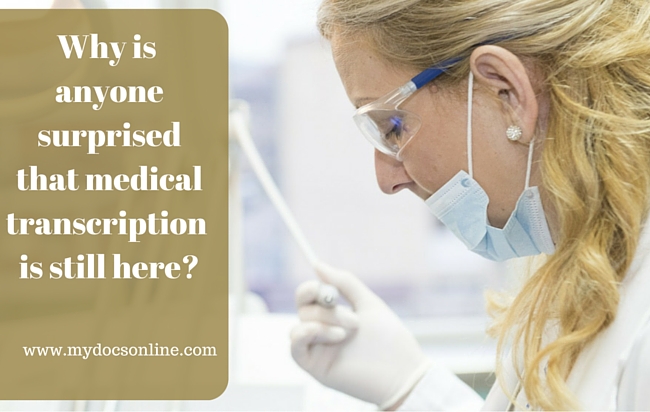 The increase in use of Electronic Medical Records (EMR) systems has led to a decrease in the traditional provider pattern of Dictate/Transcribe/Print. However, Medical Transcription is still here because several important segments of the medical community are likely to continue using dictation and transcription for the foreseeable future.  These include providers needing to communicate with professionals outside the practice. Physicians doing a second opinion, or exams for insurance companies (life insurance, accidents) or workers comp and disability claims, are all key users of traditional dictation and transcription services.

Another reason Medical Transcription is still here is because many doctors have quickly grown tired of spending a good part of their day entering data into a computer either after hours (which their families don’t appreciate) or during an exam (where they learn that patients really don’t like their doctor spending time peering into a computer and typing).

Some doctors have taken to employing a new type of assistant called a “medical scribe” that follows the doctor around, tablet in hand, dealing with the EMR while the doctor deals with the patient. Other doctors have gone back to dictating notes and having a medical transcriptionist either transcribe a note to be attached to the patient’s EMR record, or enter the data into the EMR.

Dictation technology is continuing to advance as well, as shown by the recent release of an Android-based recorder from Philips that is aimed squarely at the medical profession.

Now that we’re several years into the new age of Electronic Medial Records, it’s still safe to say the death of medical transcription has been greatly exaggerated.

Begin your free 15-day trial to see how My Docs Online can help you securely move files between medical transcriptionists and physicians.